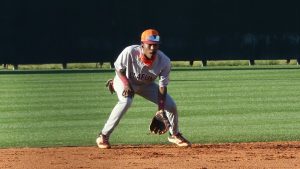 OXFORD, AL (July 17, 2022) – Claflin University sophomore Joshua Cooper carried his great play from the regular season and into the summer league as he earned a spot on the Sunbelt Baseball League All-Star Game. After a solid season with the Claflin Panthers, Cooper carried his strong play to the Choccolocco Monsters, a first year team in the Sunbelt Baseball League.

Cooper earned his spot on the all-star team by combining some great play on the field with some great play at the plate. Currently, Cooper is a starting short stop for the Monsters and he is carrying a .297 batting average with 14 runs scored and 10 runs batted in (RBI). He also has 11 stolen bases.

The honor comes after a terrific freshman season with the Panthers. He finished the 2022 season with a .302 batting average that included three doubles and a triple with 17 runs scored and seven RBI.

The Sunbelt Baseball League All-Star Game will took place, Sunday at Choccolocco Park in Oxford, Alabama. For more information on Panthers baseball, contact the Claflin University Office of Athletics Media Relations at (803) 535-5548 or log on to www.athletics.claflin.edu.