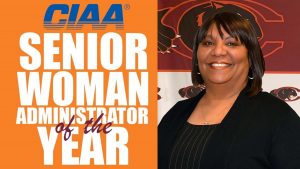 BOWIE, MD (May 18, 2022) – After helping to guide one of the most successful seasons in school history, Claflin University Deputy Director of Athletics Marilynn Stacey-Suggs was honored as the 2022 Central Intercollegiate Athletic Association (CIAA) Senior Woman Administrator of the Year. The honor was given to her at the CIAA Annual Spring General Assembly and End of Year Awards Reception in Baltimore, Maryland.

“I’m really proud of her accomplishment,” said Claflin University Director of Athletics Tony O’Neal. “This is a tremendous honor and it is well deserved.”

The award was voted upon by fellow SWA peers at the Central Intercollegiate Athletic Association. It comes after a terrific year of accomplishments by Claflin University student-athletes, including historic seasons from Lady Panthers softball which reached the championship game of the 2022 NCAA Division II Atlantic Region Tournament after claiming their first CIAA softball championship in school history. Claflin freshman sprinter Zoe Adams competed in the 2022 NCAA Division II Indoor Track & Field National Championships, and the Lady Panthers volleyball team advanced to the semifinal round of the 2021 CIAA Volleyball Championship Tournament for the first time in school history. Academically, 15 Claflin University student-athletes were inducted into the Claflin University chapter of Chi Alpha Sigma, the National College Athlete Honor Society.

In January of 2021, Stacey-Suggs was elevated to the position of Deputy Director of Athletics/Senior Woman Administrator. Among her duties, she also serves as the university’s Director of Compliance and she is the co-advisor of the Chi Alpha Sigma along with serving as the Deputy Title IX Coordinator.

Stacey-Suggs is a native of Reidsville, North Carolina and she is a graduate of Winston-Salem State University. She holds memberships in the Women Leader in College, the National Association for Athletics Compliance (NAAC), and the Minority Opportunities Association (MOAA).

For more information on the Lady Panthers and Panthers athletics, contact the Claflin University Office of Athletics Media Relations at (803) 535-5548 or log on to www.athletics.claflin.edu.