GREENSBORO, NC – Claflin senior guard Donnel Frayer, Jr. was selected to take part in the inaugural Carolina HBCU All-Star Basketball Game. After a terrific career with the Panthers, the Claflin senior will get to compete on the hard one more time alongside some of the best players in HBCU basketball. Frayer, Jr. earned a spot in the game after a terrific collegiate career. In two seasons with the Panthers, he totaled 600 points with the Panthers, including hitting 97 three-pointers. He scored a career-high 27 points in against Clarion to open the 2021-22 season. 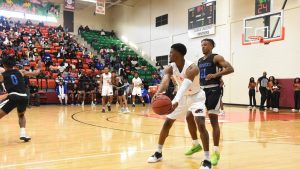 With the goal of celebrating HBCU culture and what Historically Black Colleges & Universities to the fabric of the Carolinas. The event will also serve as a chance to showcase and highlight our student-athletes. The game will feature HBCU female and male student-athletes with no remaining eligibility from campus in both North and South Carolina.

The inaugural Carolina HBCU All-Star Basketball Game will be held at the Greensboro Coliseum in Greensboro, North Carolina. The event will begin with a community tailgate with the women’s game set to begin at 2:00 p.m. and the men’s game being set for a 4:00 p.m. start. Tickets for the game are $20. More information on the inaugural Carolina HBCU All-Star Basketball Game can be found at www.CarolinaHBCUAllStarGame.com.

For more information on Panthers basketball, contact the Claflin University Office of Athletic Media Relations at (803) 535-5548 or log on to www.athletics.claflin.edu.