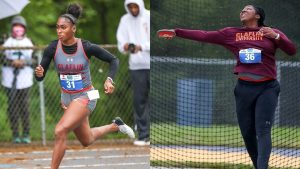 NEW ORLEANS, LA (June 23, 2022) – After a tremendous season, the Claflin Lady Panther duo of senior thrower Zaria Nelson and freshman sprinter Zoe Adams both earned spots on the United States Track & Field/Cross Country Coaches Association (USTFCCCA) All-Region Team, Tuesday afternoon. The pair earned their spot among the best in the NCAA Division II Atlantic Region after ranking among the top performers in the region in their respective events.

The honor of being selected to the USTFCCCA All-Region Team comes to individuals who rank among the top five individuals in each region in their respective events. Adams claimed her spot after posting the top time in the women’s 400m dash. It was at the Georgia Tech Invitational when Adams rana 55.93 that earned her the honor. She went on the win the women’s 400m dash at the 2022 Central Intercollegiate Athletic Association (CIAA) Women’s Outdoor Track & Field Championship Meet.

Nelson earned the regional honor for her performance in the women’s discus throw. She ranked third in the region after a 154’2″ (47.0m) throw at the Georgia Southern Spring Classic. She also went on the qualify for the 2022 NCAA Division II Outdoor Track & Field National Championship Meet where she finished 11th and earned second-team USTFCCCA All-American team.

For more information on Lady Panthers track & field, contact the Claflin University Office of Athletics Media Relations at (803) 535-5548 or log on to www.athletics.claflin.edu.