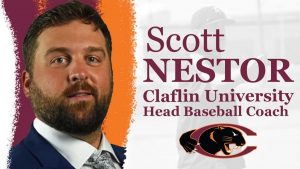 ORANGEBURG, SC (August 18, 2022) – Claflin University baseball will enter a new era as Scott Nestor has been announced as head coach of the Panthers program. After a terrific 12-year run under the guidance of head coach James Randall, who retired in June, the Panthers will head into its next chapter with a dynamic coach who will look to carry the team’s tradition into a bright future.

“We are really happy to have Coach Nestor to be a part of the Claflin family,” said Claflin University Director of Athletics Tony O’Neal. “We are really excited about the future of this program.”

“My wife Marissa and I would like to thank university president Dr. Dwaun Warmack, athletics director Tony O’Neal and the rest of Claflin University,” Nestor said. “We are extremely excited for this opportunity, and I am grateful and humbled to be the next head coach of the Claflin University baseball program.”

Coach Nestor will bring a unique vision to the Panthers’ program that will not only build on the team’s strong tradition but will also prepare the student-athletes for a bright future both on and off the field.  “My vision is simple; we are going to be a highly motivated group who will outwork our opponents,” Nestor added. “We are going to hold ourselves accountable, not just for our performance on the field, but for how we carry ourselves and our actions off the field as well.”

There will be several challenges facing Coach Nestor and the Panthers. Most recently, the Panthers are coming off a 5-28 season, but the news was not all bad as the team posted a 4-2 record in non-conference competition. The team’s last season with a winning record came in 2019 when the team recorded a 25-18 record and a third-place finish at the Division II Independent Baseball Tournament. “I am aware of where this program has been over the last couple years and I know the challenge of that,” Nestor added.

It is a return to the team’s successful past that remains as Nestor’s goal. The Panthers’ last conference championship came during the 2016 season when the team claimed the Southern intercollegiate Athletic Conference (SIAC) Baseball Championship. “I am aware of where this program has been over the last couple years and I know the challenge of that,” Nestor said. “But I am also aware of the tradition, the high importance of academics, and the drive of this athletic department to be successful and win championships.”

The Panthers will return a talented cast of student-athletes with over 20 returnees, including Peach Belt All-Conference outfielder junior Kobe Miller.

Nestor’s journey to Claflin University is the next step in an already impressive collegiate coaching career that has seen success at every stop. Most recently, Nestor served as a volunteer assistant coach at NCAA Division I Villanova where he helped the Wildcats to 19 wins last season. Prior to joining the Wildcats’ staff, Nestor spent a season as an assistant coach/recruiting coordinator at Savannah State University. He also spent three seasons at Rochester University. During his time with the Yellowjackets, the team won the 2019 Liberty League Championship and reached the NCAA Division II Regionals. The team also reached the finals of the Liberty League Championship in 2018. It was at Rochester that Nestor got his collegiate start when he spent two seasons as an assistant coach from 2013-15. During his first stint with the Yellowjackets, the team made back-to-back trips to the USCAA World Series, and he helped the development of seven USCAA All-Americans and the 20215 USCAA Student-Athlete of the Year. He also spent two years as a JV baseball coach at Seaholm High School where he guided the team to a 31-11 record over two seasons.

In addition to coaching, Nestor had a significant management career in baseball. After demonstrating his unique ability to lead and guide player development off the field, Nestor has also spent significant time assisting in management of the program off the field. He spent four years as the Coordinator of Development/Camp Director at the Varsity Shop Training Center in Bloomfield, Michigan while serving as the Director of Operations for the Oakland Bulldogs baseball team. During this time, Nestor managed several duties regarding camp and team development in addition to representing the team and facility in the community.

With Nestor’s hire, all the pieces are in place for the Panthers to head into a bright future on the diamond and beyond. “I see this as a tremendous opportunity to awaken a sleeping giant, and I am excited to get to work,” Nestor concluded.

Nestor is a 2011 graduate of Central Michigan University with a Bachelor of Arts degree. He will join the Panthers in the fall semester. For more information on Panthers baseball, contact the Claflin University Office of Athletics Media Relations at (803) 535-5548 or log on to www.athletics.claflin.edu.