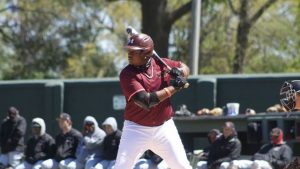 ORANGEBURG, SC (March 19, 2022) – The Claflin Panthers (1-9, 0-7 CIAA) played some quality defense, but the hard-hitting Lander Bearcats (11-12, 2-5 PBC) proved to be too much for the Panthers to overcome in a 12-1 loss, Saturday afternoon. The Panthers were able to put on a solid offensive effort in the game with six hits in the game.

As a team, the Panthers had a solid day at the plate. The Panthers totaled six hits in the game with redshirt-junior first base MacKenzie Gay leading the way with a solo home run for the Panthers.

Claflin junior Kyle Hawkins (1-4) started the game and took the pitching loss. He went four innings for the Panthers before finishing with three strikeouts and six hits allowed. Three more Panthers came in for an inning each to finish the game.

With the loss, the Panthers fall to 1-9 overall and 0-7 in Peach Belt Conference (PBC) play. The two teams will return to action, tomorrow for a doubleheader at Historic Mirmow Field. For more information on Clalfin baseball, contact the Claflin University Office of Athletic Media Relations at (803) 535-5548 or log on to www.athletics.claflin.edu.