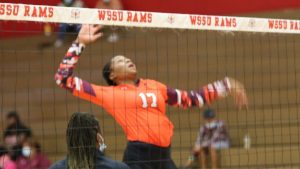 With the win, the Lady Panthers improve to 11-8 overall and 8-4 in Central Intercollegiate Athletic Association (CIAA) play. The win solidifies the Lady Panthers’ spot in second place in the CIAA Southern Division. The team will return to action, Friday, when they head to Fayetteville, North Carolina to take on the division leading Fayetteville State Broncos in a 6:00 p.m. match.