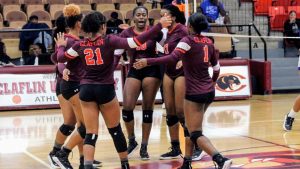 – The Claflin University Lady Panthers (1-1) had no shortage of fight, but the team couldn’t quite pull things out as the team took a hard-fought five-set loss to the Benedict Lady Tigers (1-0), Thursday. After taking losses in the first two sets of the match, the Lady Panthers battled back to claim back-to-back wins in the third and fourth sets before faltering late in the fifth set to take the loss.

The loss came despite a great overall effort by the Lady Panthers. The team played a great defensive match with 69 digs in the match. The team also featured a balanced offensive attack with 41 total kills in the match. It was the trio of sophomore Danielle Branch and junior middle hitter Mya Broom who both totaled nine kills in the match while junior outside hitter Simone Newell added eight kills as well.

With the loss, the Lady Panthers fall to 1-1 to open the 2021 season. The team will return to action, Monday when they host the Bluefield State Blues in a 6:00 p.m. match at Tullis Arena at the Jonas T. Kennedy Health & Wellness Center.