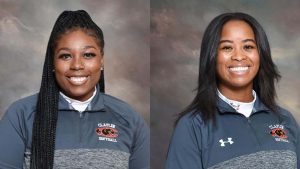 LOCK HAVEN, PA (May 12, 2022) – After completing a successful regular season and a conference championship, the honors are coming in for the 2022 Claflin Lady Panthers. The duo of senior pitcher Bre’Zhay Chambers and junior outfielder Brenay Howard were both named to the Division II Conference Commissioners’ Association (D2CCA) All-Region Team, Wednesday. The two earned second team honors and were recognized as two of the top players in the NCAA Division II Atlantic Region.

The honor was one of many for Chambers who is completing one of the best seasons of her collegiate career. She finished the regular season as the 2022 Central Intercollegiate Athletic Association (CIAA) Pitcher of the Year and she was a first team all-conference selection as well. She began the post-season in style when she was named the MVP of the 2022 CIAA Softball Championship Tournament after leading the Lady Panthers to the 2022 CIAA Softball Championship. So far, she has compiled a 10-5 overall record and a 2.86 earned run average (ERA). She also leads the CIAA with 117 strikeouts this season.

Howard earned the honor after combining some terrific defensive play with a great offensive showing. She is currently ranked seventh in the CIAA with a .407 batting average with 10 doubles, three triples, and two home runs. She also has 31 runs scored with 17 RBI. For her efforts, she also earned first team All-CIAA honors as well.

The Lady Panthers will begin play in the 2022 NCAA Division II Atlantic Region Tournament, Thursday afternoon. For more information on Lady Panthers softball, contact the Claflin University Office of Athletics Media Relations at (803) 535-5548 or log on to www.athletics.claflin.edu.