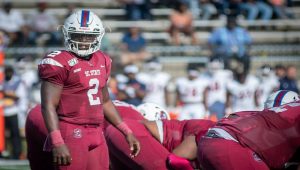 Despite the win, it was a tough defensive battle on both sides of the ball with Hornets finishing with 244-yards total offense and the Bulldogs 235 on the day.

Freshman kicker Gavin Zimmerman put South Carolina State on the board early with back-to-back field goals of 24 and 22 yards to give the Bulldogs and 6-0 lead at the 8:55 mark in the second quarter.
Running back Jacory Benson’s 3-yard punch with 4:37 left in the second closed out the half with the Bulldogs leading 13-0. DSU responded on a 55-yard punt return for a touchdown by Charles Peeler at the 8:19 mark in the third quarter to close the gap 13-7.

The Bulldogs defense stood tall down the stretch to come away with a 13-7 win over a tough and feisty Hornet team.

Jablonski Green led the charge on defense with seven (7) tackles and 3 TFL, while Octaveon Minter added six (6) tackles along with two (2) sacks on the day. Sophomore defensive lineman Patrick Godbolt added five (5) tackles for loss in the win.