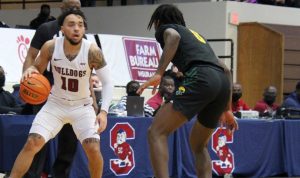 Rahsaan Edwards and Rakeim Gary each added nine (9), while Omar Croskey and T.J. Madlock chipped in seven (7) points each in the loss.

The battle started early with eight league changes. A three-pointer by Gary at the 13:08 mark push the Bulldogs ahead six, 50-44 midway through the second half. Jalen Hawkins nailed a three-pointer with 8:31 remaining.

Back-to-back three-pointers down the stretch by Joe Bryant sealed the victory for the Spartans. Bryant finished with a game-high 22 points, while Hawkins added 17 in the win.

UP Next for SC State
South Carolina State will return back to the court on Monday (Jan. 31st) in a league showdown with visiting Howard, with the women beginning at 5:30 p.m., followed by the men in a 7:30 p.m. start.