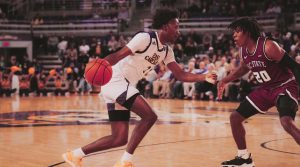 Both teams were even in team play, with the Bullldogs having the slight edge in points in the paint (32). ECU led 42-34 during the intermission.

In the second-half the Pirates built their biggest lead 12, 60-48 off a pair of free throws by Vance Jackson during the 7:11 mark. South Carolina State rallied back to cut the lead, 60-58 of a layup by Deaquan Williams with 4:32 remaining.  The Pirates offense bounced back to give the Pirates the 70-62

Next up South Carolina State will participate in the “Rising Coaches Classic” where they take on host College of Charleston on Thursday (Nov.11th) at 7 p.m., Loyola University (Maryland) on Friday (Nov. 12th) at 4 p.m. and Lipscomb University on Saturday in a 7:30 p.m. start.