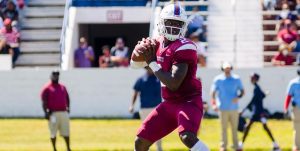 Redshirt freshman Kendrell Flowers posted his first 100-yard game of the season, with 17 carries for 121-yards and two (2) touchdowns.  Flowers second touchdown came on a 14-yard toss from Fields, Jr.  at the 9:54 mark in the second quarter.

Senior running back Jacory Benson provided a solid day on the ground with eight (8) rushes for 68-yards and a touchdown.

Fields, Jr. responded on a 12-yard pass to sophomore tight end Yancy Washington to close out the quarter and give South Carolina State an 27-16 advantage.

Davius Richard and the Eagles would push the limit again on an 18-yard toss to Ryan McDaniel at the 9:37 mark in the fourth quarter.  Defense played down the stretched as South Carolina State held on to a 27-24 win over NCCU.

Senior linebacker Chad Gilchrist led the defense with a game-high tackles, while Jalen Barr added seven on the day.