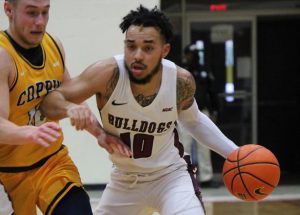 Junior guard Rahsaan Edwards tossed in a team-high 15 points, six rebounds and two steals, teammate Edward Oliver-Hampton recorded the games only double-double with 11 points and a game-high 15 rebounds in the win.

Jemal Davis and Omar Croskey added 10 each respectively for the Bulldogs.

The Bulldogs ranked nationally in rebounding dominated on a boards today with 49-35 over the Eagles, while leading the way in points in the paint (34-16), points off turnovers (20-17) and bench points (21-20).

Up Next: South Carolina State will wrap of the second of two-game road trip against Morgan State on Monday (Feb.14th) in a 7:30 p.m. start. SCSU then return home for the final of a two-game home stretch of the regular season versus Maryland-Eastern Shore (Feb. 19th) on Saturday in the fir