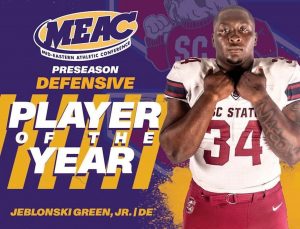 South Carolina State defensive lineman, Jeblonski Green has been named second-team FCS All-American by Stats Perform. Green, who missed four games last season, finished seventh on the team with 38 total tackles. He led the team with 19.5 tackles for loss and finished with 3.5 sacks and an interception.

The redshirt junior was selected as the Preseason Defensive Player of the Year at the recent MEAC football media day. He is one of 10 HBCU players selected among the three teams and the lone MEAC player chosen.

The Paladins were recently selected to finish third in the Southern Conference behind East Tennessee State and Chattanooga.