Buddy Pough is a legend in South Carolina. He should be a legend everywhere 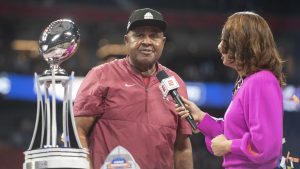 ORANGEBURG, S.C. (October 9, 2022) — Man, that face. That was some face now, Dec. 18 in the rowdy spaceship of a stadium in downtown Atlanta. That face, 68 years old as the game clock struck 0:00, could reach right out of a TV screen and lasso your whole damned heart with all its disbelief and striving and pinnacle. Even the tears, so rare on that face, got out of the ducts and roamed.

Now here’s the same face nine months on in a golf cart parked at the 35-yard line at unpretentious Oliver C. Dawson Stadium just after a practice that ended at 8 a.m., like always, and if there’s a better place around the psychedelic trail of American college football than the passenger seat of Buddy Pough’s golf cart, please do alert. There’s a train whistle in the distance and a fine rasp of a voice up close, a voice in season No. 21 of helming the South Carolina State Bulldogs, a legend around here who ought to be a legend around everywhere.

Pough’s 20th team spent Dec. 18 kicking the shiny behinds of Deion Sanders’s wildly favored Jackson State all over the Celebration Bowl, and a green sign just off Interstate 26 entering this town of 13,563 — between Columbia and Charleston — boasts of the 2021 historically Black college and university national champions. But it’s September 2022 by now, so the voice tells of a team “finding itself,” of 18 starters returning but stalwart corners Cobie Durant and Zafir Kelly gone to the NFL and a deathless menace: “Depth always worries you.” He says: “You know, we had all these plans of grandeur. And we might fall flat on our face. And that worries me.” Then he laughs that deep laugh people know from the Lowcountry to the Upstate, the one that makes Brad Scott, who hired Pough as running backs coach in 1997 at South Carolina, stop mid-thought and say, “That little laugh, that little smile of his, is pretty dang special.”

Yet it’s a Thursday morning, and the Bulldogs must play up at rival North Carolina A&T on Saturday, so this walking, cycling library of a man steeped in verve and intelligence and wit and two replaced hips and one replaced knee says, “I’m as nervous now” as back in 2002 when he began in a whole different generation and felt he could outrun half his roster.

It’s a Thursday morning, so he also has the meeting of the local Touchdown Club he helped to found, honoring local high school players among other endeavors. He’s also in Rotary. He’s also on at least one hall of fame committee. He also arranges speakers for various local clubs. He also gets up at 3 or 3:30 or 4. He also says he hasn’t had a good sleep in 20 years and can’t go to sleep until he has learned the nightly fate of his cherished Atlanta Braves. He also has battled the durable strain of stretched resources, spearheading scholarship drives and whatnot.

He also has eight Mid-Eastern Athletic Conference titles, one HBCU title, a 144-83 record, a trek through at least six athletic directors and at least 11 presidents (counting acting and interim), and a passage through some bumpy rapids of the past decade when some around here craved his exit. He also has a 48-12 record in the past 19 Novembers, which tells a whole lot about a whole lot. He also has a giant heart. He’s also an artful cusser. He’s also a presence standing before his team and introducing a pastor at a voluntary team chapel on a game eve.

“He’s a community guy, and if it were not for him, his church would fold,” says Willie Jeffries, the fellow legend who preceded Pough and coached Pough when Pough was a Bulldogs math major and offensive lineman who could pull like pure hell.

“We have a little radio network,” said Ernest Robinson, the Bulldogs’ play-by-play voice, “and we have a coach’s show. Up until two years ago, you know who our number-one sales person was?”

He’s also something of a genius in the area of human relations, mandatory humility included.

Los Angeles Rams rookie cornerback Cobie Durant says, “It was an honor playing under him.” Clemson Coach Dabo Swinney calls Pough “just one of the better people you’ll ever meet.” Former Clemson assistant and current Virginia head coach Tony Elliott, who assisted Pough in 2006-07, tells of “the biggest heart you’d ever be around.” Another former Pough assistant, Florida Coach Billy Napier, begins a paragraph of plaudits as follows: “There’s only one Buddy Pough.” Local businessman Rob Hibbits, who helped found the Touchdown Club where the remarkable Jeffries, nowadays 85, throws a penalty flag at any rambling speaker, says of Pough, “He’s quite a fellow.” Scott sees “an overcomer” and “a survivor.” South Carolina Coach Shane Beamer likens Pough to Beamer’s father, Frank of Virginia Tech, in terms of longevity and goodness.

Jeffries notes Pough’s sense of people — “The kid from a two-parent brick house, he knows how to talk a little more softly to them” — and says, “He can go to England and talk to the Queen and he can go right down to the basement and start a craps game, and he can be at home in both.” Jamie Scott, who owns fitness centers in Columbia and played running back for Pough at both South Carolina and South Carolina State, says: “What’s interesting about these relationships, that Coach Pough has fostered, he does this effortlessly. You want to stay in contact with him.” He recounts the vividness of a running backs film session from way back in 1998, when Pough said to a player of a missed block, “Steve, it’s just like you were in the woods, and you and the running back were being attacked by a bear, and you turned around and helped the bear.”