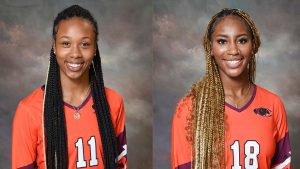 CHARLOTTE, NC (August 24, 2022) – After some terrific play last season, some well-earned honors are coming to a pair of Claflin Lady Panthers as seniors Mya Broom and Simone Newell were named to the 2022 Central Intercollegiate Athletic Association (CIAA) Preseason All-Conference Team. The honors are well deserved for the duo after finishing the 2021 season as two of the top newcomers to the CIAA.

Last season, Broom and Newell were two of the top players in the CIAA. The preseason honor is nothing new to Newell as she was a first team all-conference selection last season. She led the team in both kills (194) and digs (273). Broom was also no stranger to honors as well when she was a second team All-CIAA selection after totaling 178 kills to rank second on the team.

For more information on Lady Panthers volleyball, contact the Claflin University Office of Athletic Media Relations at (803) 535-5548 or log on to www.athletics.claflin.edu.