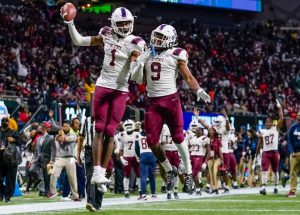 The last time South Carolina State won an HBCU national championship was 2009. Bowie State has never won one. This time, it was the Bulldogs’ winning the crown. Actually, two different Bulldogs.

The 2021 HBCU college football season is complete and two teams have been named HBCU national champions. The South Carolina State Bulldogs, who defeated Jackson State in the Celebration Bowl, finished No. 1 in the BOXTOROW Coaches Poll, while the Bowie State Bulldogs finished atop the Media Poll. This was the first time since 2012 that the BOXTOROW Coaches and Media Polls had different champions.

South Carolina State went undefeated in conference play on its way to the MEAC championship and the 31-10 victory over the Tigers in the Celebration Bowl on Saturday.

“This is a special one for me, being able to win the 2021 Celebration Bowl with an HBCU national championship,” said South Carolina State head football coach Buddy Pough, who is in his 20th season at the helm. “All that we had to endure as a team and university, nothing is more special than finishing strong as champions.”

Bowie State had its best season ever, finishing 12-2 and winning its third straight CIAA championship. BSU also finished in the quarterfinals of the NCAA Division II playoffs.

“This is a great honor that we will cherish,” said Bowie State head football coach Damon Wilson, who just completed his 13th season as head coach. “Our coaches and players did an outstanding job this year, representing our university and conference (CIAA).”