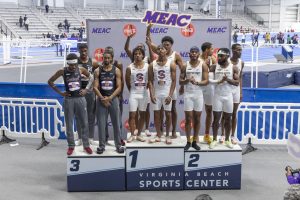 VIRGINIA BEACH, VA (February 24, 2022) – Both South Carolina State track teams finished sixth in the team standings at the 2022 MEAC Track and Field Championships conducted Feb. 21-23 at the Virginia Beach Sports Center. The SCSU men compiled 47 points and the women 41 for the competition.

On the final day of the three-day competition Wednesday, SC State grabbed two firsts, a runner-up finish and a third-place showing. Junior Jada Banks captured the 3000 meters (10:27.64), the men’s 4×400-meter relay team of Devin Brewington, Waddell Rembert-Jett, Jaden Barker and Tyler Jeffers was also first (3:13.64) with its best clocking of the season, while Tyler Jeffers was second in the 800 meters (1:55.18) and the women’s 4×400-meter relay team (Taryn Thorn, Ra’Necia Brown, Jasmaine Donovan and Debrielle Williams) third in a time of 3:48.76. 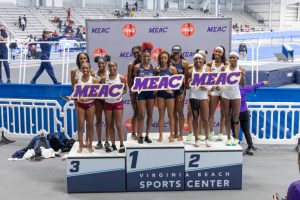 “We made quite a few podium appearances,” said Wims following the competition. “We are making progress and we certainly made out presence felt. With Jada (Banks) earning a double (5000m, 3000m) and our men’s 4×400 winning, it shows that we can compete, our track programs are on the rise and we should be taken seriously. I expect an even better outcome during the outdoor season.”

Banks accounted for 22 of the Lady Bulldogs’ 41 points in earning first-team All-MEAC accolades. The top three performers in each event earned All-MEAC honors.