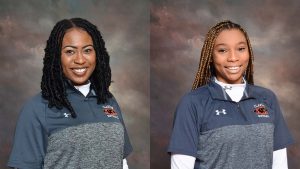 Beavers took home the honor after a terrific performance last week. She had a great day at the plate with seven hits in eight at-bats of a doubleheader win at Saint Augustine’s. The effort included scoring seven runs with six runs batted in (RBI). She finished the week with an .875 batting average.

The honors didn’t just stop at the plate as Thomas put on a dominating pitching performance in both games of the doubleheader. She held the Falcons to just one run in the doubleheader. She recorded 19 strikeouts, including striking out 11 in a shutout win. She finished the week with a 0.70 earned run average (ERA).

The Lady Panthers will return home for their next action as the team will host the Livingstone College Blue Bears on Saturday before hosting the Johnson C. Smith Lady Golden Bulls on Saturday. For more information on Lady Panthers softball, contact the Claflin University Office of Athletics Media Relations at (803) 535-5548 or log on to www.athletics.claflin.edu.