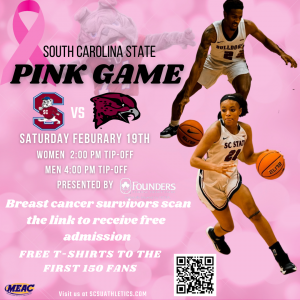 Tip-off for the women’s contest begins at 2 p.m., followed by the men’s in a 4 p.m. start. You can listen to the game live on https://espnorangeburg.com/

SERIES: The Bulldogs lead the series 9-4 after 13 meetings between the two schools. The Bulldogs captured the last three meetings including an 69-60 win over the Hawks in Princess Anne, MD earlier this season. Meanwhile on the women side, the Lady Bison lead the series 7-5 in their last 12 meetings. SC State poste back-to-back victories over the Lady Hawks including an 54-50 road win earlier this season.

LAST TIMEOUT: Both team suffered setbacks against Morgan State on last Saturday. On the men’s side the Bulldogs fell 66-76 to the Bears, while the Lady Bulldogs dropped and 48-76 decision  the Lady Bears .

UP Next for SC State
South Carolina State will close out the regular season home finale Monday (Feb. 21st) when they host visit Delaware State at Smith-Hammond-Middleton Memorial Center. Tip-off is 5:30 p.m for the women and 7:30 p.m. for the men.