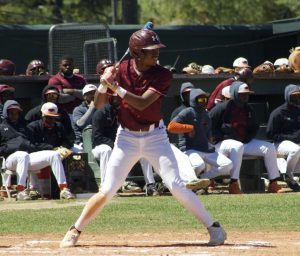 ORANGEBURG, SC (February 8, 2022) – The Claflin Panthers (1-0) opened the 2022 season with a bang, Tuesday, when the team took a 7-1 win over the Voorhees Tigers (0-3). The Panthers used a great offensive effort combined with some strong defense to claim the win.

The Panthers took the win behind a great performance at the plate. As a team, the Panthers scored seven runs on nine hits in the win. The effort included three doubles as well. Senior outfielder Steve Joyner led the way for the Panthers with three RBI with two runs scored for the team. Junior first base MacKenzie Gay added a pair of RBI with a run scored of his own.

It took a while for the Panthers to get things into gear, but once the team got rolling, there was no stopping them. After allowing the Panthers to go ahead early in the second inning, the Panthers answered in the third inning when freshman Jelani Howard hit an RBI double to score Joyner. It was in the fourth inning when the Panthers really got things going with three runs scored. Joyner got the scoring started with a two RBI double that was followed by a two-RBI single from Gay. Senior Quinten Kinard rounded out the inning with an RBI single. The Panthers added another score in the seventh inning when Joyner hit into an RBI fielder’s choice that scored another Panther run that sealed the Panthers’ 7-1 lead. From there, the team turned to its defensive efforts to claim the win as they held the Tigers without a run.

The Panthers also benefitted from a terrific pitching performance as well. Junior Kyle Hawkins (1-0) got the pitching win after he started the game and went five innings. He finished the game with four hits allowed with a run scored. He also added four strikeouts. Senior T.J. Hubbard came in for two innings and he allowed no hits with two strikeouts. Junior Christian Carr added an inning before junior Charles Jackson came in to close out the win.

With the win, the Panthers improve to 1-0 to start the season. The team will return to action, next Wednesday they head to Denmark, S.C. to take on the Tigers.