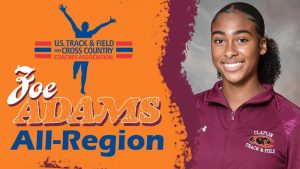 NEW ORLEANS, LA (March 8, 2022) – The honors just keep coming in for Claflin freshman sprinter Zoe Adams as she was named to the United States Track & Field/Cross Country Coaches Association (USTFCCCA) NCAA Division II Women’s Indoor Track & Field All-Region Team, Tuesday afternoon. The honor was just another of several honors for Adams who had a spot among the best sprinters in the NCAA Division II Atlantic Region.

Adams was named to the USTFCCCA All-Region Team in the women’s 400m dash and the 200m dash. The honor goes to the top-5 individuals in each event. Adams finished the indoor track 7 field season ranked first in the women’s 400m dash when she ran a 55.65 to win the 2022 Central Intercollegiate Athletic Association (CIAA) Women’s Indoor Championship. She is also ranked fifth in the region in the women’s 200m dash after she ran a 25.03 in the event at the 2022 CIAA Women’s Indoor Track & Field Championship. The team earned her a runner-up finish in the event.

After earning the regional honor as well as several conference honors, Adams will turn her attentions to the national stage when she takes part in the 2022 NCAA Division II Women’s Indoor Track & Field National Championship this weekend. She earned the spot after running one of the top 20 times in the women’s 400m dash this season. The meet is scheduled to begin Friday, March 11th at the Robert W. Plaster Center in Pittsburg, Kansas.

For more information on Lady Panthers track & field, contact the Claflin University Office of Athletic Media Relations at (803) 535-5548 or log on to www.athletics.claflin.edu.