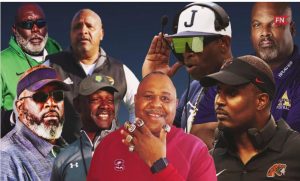 Ranking HBCU head football coaches isn’t easy, especially when it comes to ordering the top ten coaches in the SWAC, MEAC, CIAA, SIAC, and OVC. I polled HBCU fans, media, and personalities for their opinions on “Who Are The Top 5 Most-Powerful HBCU Football Coaches in 2022” on Twitter and Facebook, then I expanded it to the top ten coaches.

Interestingly, many put aside the HBCU rivalries and logically gave input on the subject. Initially, a few were timid, but the rankings started to roll in.

I decided on a formula. I used HBCU’s previous year’s winning percentages, conference ranking, conference strength, 2021 recruiting impact, coaching staff, media, social media, and fanbase influence to determine the top coaches. Points values of 0 to 5, 5 the best, were assigned to each coach per category.

New head coaches to the SWAC, Hue Jackson (Grambling) and Eddie Robinson Jr. (Alabama State), received a pass for 2021.  I did give them extra weight in the wins column for their NFL experience.  It’s subjective, but I felt the new coaches deserved a sort of equity to their already standing colleagues.