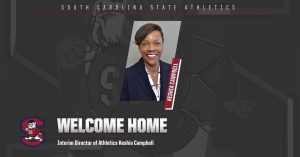 – South Carolina State Hall of Famer Keshia Campbell has been named the interim director of athletics at her alma mater, the university announced Tuesday (Aug.9th). Campbell will assume her duties immediately.

Campbell, the second female athletics director to lead the SC State Program, brings a wealth of experience in athletics administration to the university, a member of the Mid-Eastern Athletic Conference (MEAC).

She returns to Orangeburg after serving several years in education in the public sector in South Carolina. She previously served as a senior associate commissioner at the Central Intercollegiate Athletic Association (CIAA).

Prior to her stint at the CIAA, she was director of business affairs and lean coordinator at the University of Texas at Dallas and was promoted from assistant to associate director of championships at the NCAA(2006-2009).

An SCSU Athletics Hall of Famer, the Blenheim, SC native was named Mid-Eastern Athletic Conference Player of the Year while playing for the Lady Bulldogs and is a member of the MEAC 50th Anniversary All-Time Team. She also served seven years as head women’s basketball coach at SC State and was named MEAC Coach of the Year in 2001.

Campbell earned both a bachelor’s degree in physical education and a master’s in rehabilitation counseling at SC State.

Campbell, valedictorian at Blenheim (Marlboro County, S.C.) High School in 1987, is a 2008 graduate of the National Association of Collegiate Women Athletics Administrators (NACWAA) HERS Institute and a 2006 graduate of the NCAA’s Inaugural Leaderships Institute for Ethnic Minority Females.