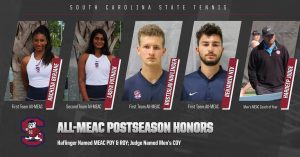 Haflinger was 10-5 in singles play this season, going 5-0 against MEAC opponents in helping the Bulldogs claim the regular-season title. Splitting time among the top three singles positions, Halfinger was 6-5 at No. 1 and 3-0 at No. 2 this season, and he enters the MEAC Tennis Championships having won six of his last 10 matches. In doubles play, was 7-1 with partner Ivan Pauluychenko (6-1 in No. 2 doubles), including a perfect 5-0 mark in MEAC play.

Judge earned his seventh MEAC Coach of the Year honor after leading the Bulldogs to yet another MEAC regular-season title and a perfect 5-0 mark in league play. South Carolina State also picked up non-conference wins this season against The Citadel, USC Sumter, Gadner-Webb, Lehigh and Colgate.

Grayson went 9-4 in singles play this season, all at the No. 1 position, including a 5-1 mark in conference play, in helping the Bison go undefeated in the MEAC and win the regular-season title. She has won her last three singles matches and seven of her last 10, and Grayson is a two-time MEAC Player of the Week and Rookie of the Week this season. In doubles play, Grayson went 10-2 alongside Sifa Butcher, including a perfect 6-0 mark in MEAC play.

Au-Yeung was Delaware State’s No. 1 singles player this season, going 7-3 overall and 4-2 in conference play. She also went 9-2 in doubles play, including a 6-0 mark in MEAC play, alongside Eva Golembiovski at the No. 2 doubles spot.

Askew led the Bison to the MEAC regular-season title in 2022 (their first since 2015), going a perfect 6-0 in conference play and 9-4 overall. Howard’s non-conference wins this season came against the likes of Mount St. Mary’s, Loyola (Md.) and rival Hampton. Askew is Howard’s first MEAC Coach of the Year since Larry Strickland won the award in back-to-back seasons in 2010 and 2011.

The 2022 MEAC Men’s and Women’s Tennis Championships begin with women’s play on Thursday at 8 a.m., with the men starting at 2 p.m. The championship concludes on Saturday with the women’s final beginning at 9 a.m., followed by the men’s title match at 1 p.m.

All matches will be held at the Cary Tennis Park in Cary, N.C.